Wakefield Cathedral, alternatively known as the Cathedral Church of All Saints, located in West Yorkshire is one of 3 Anglican Cathedrals for the Diocese of Leeds and a seat of the bishop of Leeds.

The Cathedral is built on the site of what was originally a Saxon Church which was discovered after making extensions to the east of the building in 1900. Casting back to the Domesday Book of 1086, the church in Wakefield was first referenced. In 1090, William 2nd gave the church and land away and shortly after that a Norman Church was built. Throughout history the Norman church was rebuilt, expanded and adapted. Between 1409 to 142o the striking western tower and spire were added to All Saints Church.  Most of the rebuilding, expanding and adapting took place during the Wars of the Roses, even while the Battle of Wakefield was being fought closely, at Sandal Magna in 1460. Previously known as All Hallows, the church became known as All Saints after the Reformation.

During the 15th century, All Saints Church was rebuilt in the Perpendicular Gothic style featuring much higher walls, large stained-glass windows with supermullions, transoms and Tudor arches. The cathedral also has a full collection of 15th century ceilings throughout the Nave, aisles and east end, which show carved bosses illustrating a wide variety of religious and secular imagery. During 1858 to 1874, a Victorian Restoration by George Gilbert Scott and his son, John Oldrid Scott, took place after many years of neglect. The church later became a cathedral when the diocese of Wakefield was created in 1888. Following the church becoming a cathedral, John Loughborough Pearson was commissioned to design a new east end of the cathedral which came to fruition in 1893 to 1905.

The modern-day cathedral is clad with ashlar sandstone and features a porch, wrought iron gate and sundial. The oldest part of the cathedral dates to 1150, which can be found in the north aisle of the cathedral.  The cathedral boasts a very tall, 75 m, crocketed spire which is the highest in Yorkshire.

Situated on the southside of the River Calder, The Hepworth Wakefield is a 1600m² art gallery named after artist and sculptor Barbara Hepworth who came from the city.

Designed by architect David Chippendale, the gallery cost £35 million to build. To the casual observer, it may look like a rock-like, random arrangements of buildings. However, Chippendale responded innovatively to the waterfront setting, sourcing most of the heating and cooling from the river’s flow. Composed of 10 trapezoidal blocks, the upper galleries are lit by natural lighting from large windows in the pitched roofs. River Calder, the waterfront and the Wakefield city skyline can all be seen from the windows giving visitors great views of both artwork and outdoor scenery. The gallery comprises of 10 naturally lit exhibition rooms, learning studios, an auditorium and an archive.

A quick scan of the plan shows the randomness of the 10 galleries are cleverly arranged around 2 straight walls, meeting at a 90-degree angle to the entrance hall at ground floor level. These orthogonals, however, do not command the attention of the observer.

A more detailed look of the plan, however, reveals they are organised on harmonious 78/12, 5/85-degree alignments, notably seen in the performance space. The cladding of the building is the first of its kind in the United Kingdom, being a self-compacting pigmented concrete made on site giving the building a sculptural-like feel influenced by the sculptures created by Barbara Hepworth. The purple-grey tinge to the concrete adds to the lithic appearance of the gallery, enhancing the geological quality.

The building design, however, faces criticism from locals due to it being in the style of New Brutalism – a post-war era style characterised by minimalist constructions showing bare building materials and structural element opposed to being aesthetic. 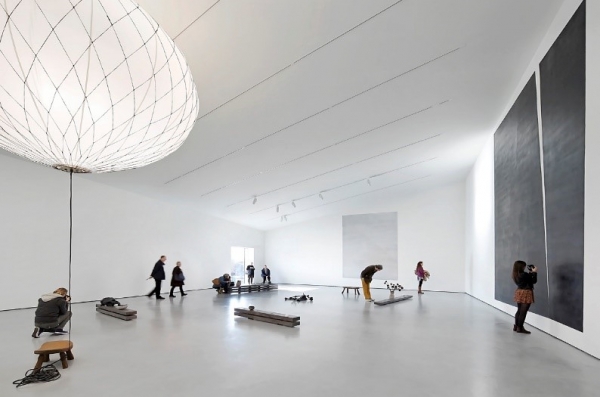