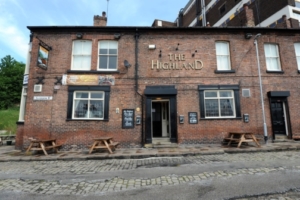 A former pub is set to be demolished to make way for new apartments and a coffee shop or bar in the heart of Leeds’ student district.

Plans have been submitted to Leeds City Council, via applicants Depho Estates Ltd, for a nine storey building on the site of The Highland pub in Woodhouse, north of the city.

They seek permission to demolish the pub, which is said to be in poor condition and being held together by steel.

Depho has ruled out renovating the pub, saying it would not be cost effective and believe the planning application is more in line with what the council’s strategic plans are for the area.

The site, at 36 to 38 Cavendish Street, is on designated brownfield land, but is already surrounded by other new student accommodation and falls into an area that is being earmarked as a new ‘Gateway into Leeds’.

The developer maintains there is a desire for quality developments and regeneration type projects in that Kirkstall Road approach to the city centre.

Plans show a block of 14, two-bedroomed apartments would be built with a cafe or bar on the ground floor.

Drawings suggest it will take the shape of a triangular shaped building, which has been borne out of the constraints of the shape of the site, say developers.

There have been discussions between the applicant and city planners, prior to submission of the plans, who are said to have expressed concerns over the loss of a “locally important historic non-listed buidling.”

In a statement provided to the planning board, Depho said: “The pub has a limited lifespan in its present form and there would be considerable cost implications for its restoration that would make it financially unviable.”