The David Hockney building located at Bradford College, designed by Bond Bryan architects, provides an innovative and technology-rich learning experience at the heart of Bradford for its students. The design combines of striking architecture and innovative learning environments to get a highly flexible yet cost-effective solution.

The new building is named after artists and alumnus David Hockney who was born in Bradford, starting higher education at Bradford College of Arts before attending Royal College of Arts, London. The project was a £50 million scheme that replaced 50,000m² of badly outdated facilities with a singular 24,000m² new building to improve the education of their students.

The design of the building honours the textile industry of Bradford by reproducing the imagery of woven fabric within the coloured segments of the elevations. The building is made from locally sourced natural sandstone from Brighouse.

Sustainability was a key aspect to the design and production of the David Hockney building. For example, the traditional concrete frame was redesigned, and all timber used was also sustainability sourced. Conscious efforts were taken to not use unnecessary materials and where possible materials like plywood were reused for new purposes. Other sustainable features of design on the build include enhanced insulation, bio-diverse roofing and solar panelling, among others.

Located in Centenary Square, Bradford the 19th Century grade 1 listed town hall is a notable landmark for its bell and clock tower.

During 1847 to 1872 the town hall was in Swain Street at Fire Station House. In 1869, a new triangular site was bought, and a competition was set up to receive designs for a town hall to rival that of neighbouring cities Leeds and Halifax. Lockwood and Mawson were the architects who won this competition.

Their design was in the Venetian Gothic style and their clock town was inspired by Palazzo Vecchio in Florence. The notable clock tower reaches 200 feet high, containing 13 bells, weighing over a tonne each. In 1872, the clock was added to the town hall tower at the cost of £2248.

Built in Gaisby rock sandstone, the façade of the town hall features a series of statues of past monarchs, such as Oliver Cromwell, made of local quarry stone. The building later saw an extension with a new entrance and staircase in a baroque marble by architect William Williamson in 1914.

In 1965, the town hall was renamed to the Bradford City Hall as a reflection of Bradford’s prominence and additional improvements were made to the building consequently.

The bells of the clock tower still ring to this day every 15 minutes, playing tunes at midday and carols in December. 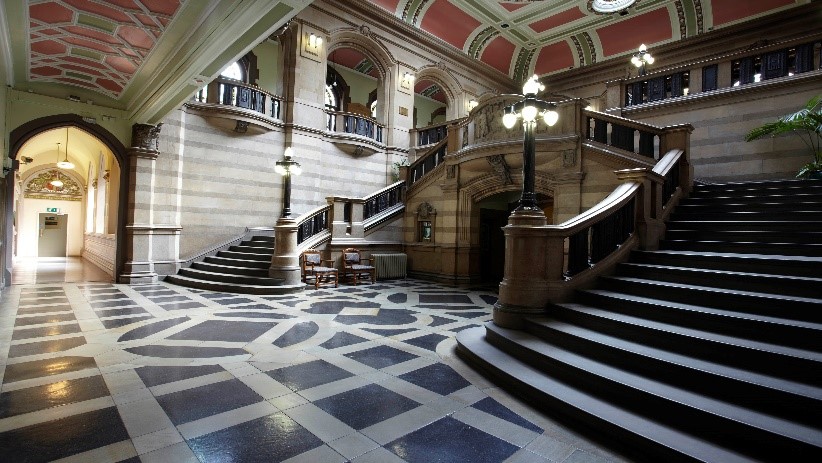