This scheme was not the easiest the build. With a tight budget and a small location, the £21 million 4 storey pavilion replaces the previous pavilion and substandard media centre. The designers thought it o be imperative to avoid the ubiquitous cable-stayed roofs and single-use media pods typical to other pavilions. The 4000m² pavilion boats a stand that tilts towards the wicket at a 14-degree angle – the optimum angle to avoid glare cost-effectively – covered by a cape made up of triangular metal panels hanging from a steel frame preserving heat loss and gain while ensuring sufficient daylight in coaching areas. The building bends around the pitch, giving spectators good views of the game.

Although the interior is not the architects’ first choice, the lack of budget meant that designers opted for the cream and purple Leeds Met branding. The pavilion is mostly a natural green and white tone, designed to visually break down the mass of the pavilion featuring green rain-screen classing in various tones, perforation and pitches to give it a softer look overall. Divided into opening and fixed panels, the windows span floor to ceiling and are tinted with slight purple tones, to oppose the greenery.

Funded in majority by Leeds Metropolitan University, the YCCC could not have the wide ranging, high quality facilities it has with out them. Hospitality suites, spacious changing rooms and an upgraded media facility are all elements of the pavilion that make it the first class building for sports and higher education that it is. The facilities allow the Leeds students to access ‘real world’ media centres, sporting, hospitality and management experiences.

However, the order was tall. A dial-use, year-round, higher education and sport facility provide difficult for architects to create. It was essential the building worked in several ways to cater for the time of year and the sport being played. Carnegies Pavilion is designed with environmental, economic and social sustainability at the forefront of the project in order to achieve the ‘Excellent’ environmental assessment rating (BREEAM). 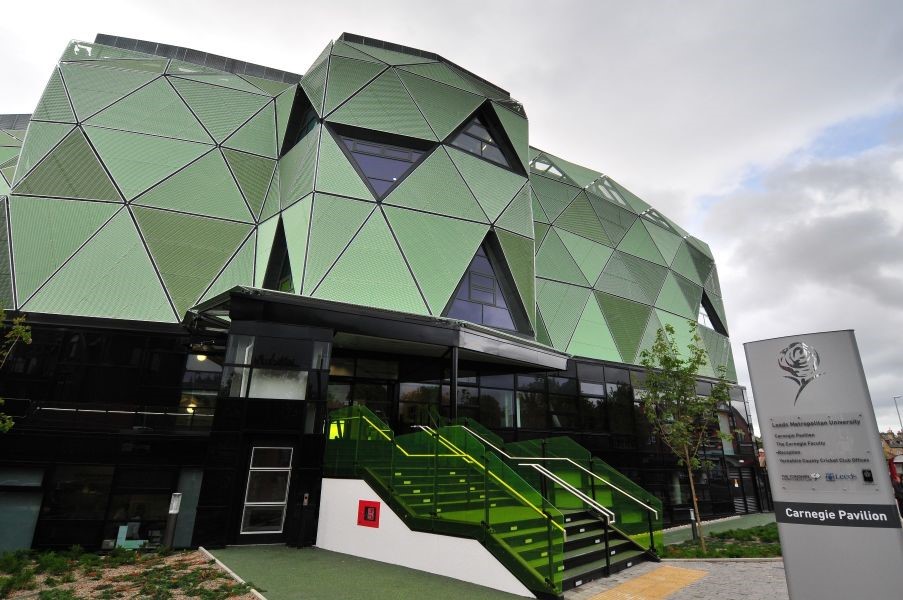 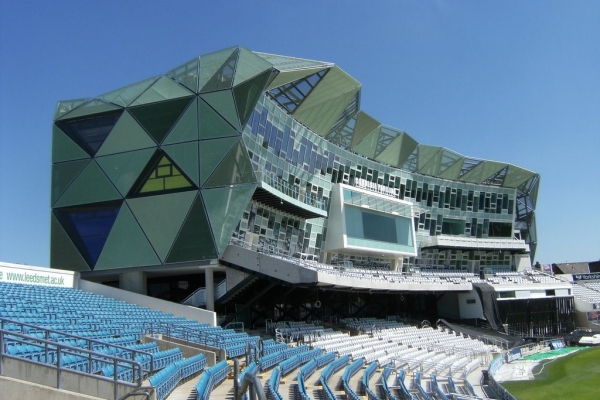 Leeds boasts a popular shopping area in the city centre combing the restored Victorian shopping arcades, The Victoria Quarter – dubbed ‘the Knightsbridge of the North’- and The Victoria Gate Shopping Centre fusing Victorian design with contemporary.

The Victoria Quarter is a Grade 2 listed building located on historically narrow yards housing slaughterhouses, slums and butcher’s shops. 2 of its joining arcades, The Country and Cross Arcades, were designed by Frank Matcham, specialising in theatre architecture, in 1898 to 1904 along with the Empire Theatre which presented well known acts such as Harry Tate and Charlie Chaplin. The arcades each of three storeys and an attic, featured stunning glazed barrel roofing adorned faience made of marble and mosaics, from the local Burmantofts Pottery along with flamboyant pink and buff terracotta facades.

The third arcade came in 1961 after the Empire Theatre was demolished. When restored in 1989 to 1996 by Derek Latham & Co, the Queen Victoria Street was glazed completed with a mesmerizingly colourful stained-glass roof by Brain Clarke spanning 746.9 m2. Today, the roof is still the largest stained-glass roof in Europe. The arcades provide a continental atmosphere, bustling shoppers, cafes on the street, a beautiful waterfall all adds to the unique experience of the Victorian Quarter.

The second part to the Victoria area of Leeds is the Victoria Gate Shopping Centre. The shopping centre was a £165 million development built on an undeveloped site neighbouring on the Leeds Market by Hammerson, property developers and investors in 2016. The building comprises of a multi-story car park and a U-shaped sheltered pedestrian area of shops, restaurants and cafes. 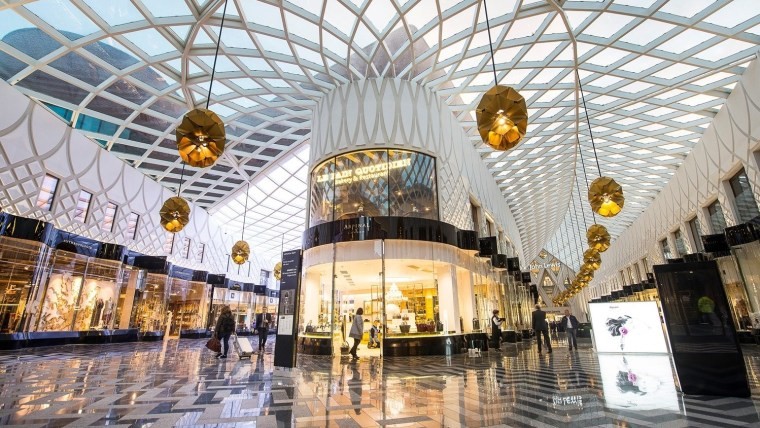 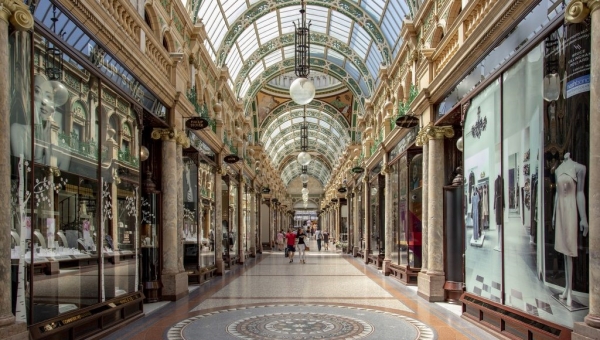 Designed by architect Cuthbert Brodrick, the 19th century municipal building, Leeds Town Hall, planned to have law courts, offices, a public hall and ceremonial rooms all under one roof, unlike any other building at the time.

In `850, the Leeds Town Council held a public meeting, deciding to build a large public hall. Taking inspiration from St George’s Hall, Liverpool, the council intended to sell shares, but there was little public interest for this idea.

The council sent delegations to towns like Manchester and Liverpool to investigate their plans for public halls. The site on Park Lane, Leeds, later redeveloped into the Headrow was recommended for the location of the new town hall.

In 1852, the council tendered for designs from architects in an open competition, typical of Victorian tendering at the time. The brief was extremely ambitious and wanted to achieve something, not even St George’s Hall, Liverpool achieved. Moot halls, concert rooms, courthouses, municipal offices and reception tooms were all designed to be under one room with enough space for 8000 people yet on a modest budget. The Victorians were not a fan of incurring civic expense without proof of public advantages and ridiculed the small budget.

A young architect from Hull, Cuthbert Broderick, won the contract having a love for classical architecture, the beauty of his designs stood out from the rest. He went on to design other well-known buildings in the West Yorkshire area such as the Corn Exchange and the Mechanic’s Institute.

Brodrick took influence from both French and Roman design, his plans for the Town Hall included a strong entrance colonnade. The council initially had doubts about Brodrick due to his youth however, his work was praised by Sir Charles Barry, giving the council faith in Brodrick. Brodrick took interest in new techniques, the roof of the Victoria Hall uses an innovative system of laminated wooden beams, held by wrought iron bolts which are thought to be their first example in wood taking influence from Paxon’s Crystal Palace.

The builders chose Rawson Hill stone for the sections of the building that were going to be carved, Derbyshire gritstone formed the columns and the rest of the building was made from Yorkshire stone. The building works encountered many issues, recurrent complaints regarding slow progress, poor workmanship, poor quality of stone as well as pressure from Queen Victoria’s agreement to open the build. The total cost of the Leeds Town Hall after structural and design contracts was around £125,000 – the equivalent of about £13 million in 2019 – a great expenditure at a time when there was a lot of poverty in West Yorkshire.

There were many design revisions through out the project, additions of an organ, ventilation turrets and a tower are all some examples of additional work. Adaptions were also made after opening, changes were made to the steps making them semi-circular as well as the additional of sculpted lions.

In 1951, the Leeds Town Hall became a Grade 1 listed building. 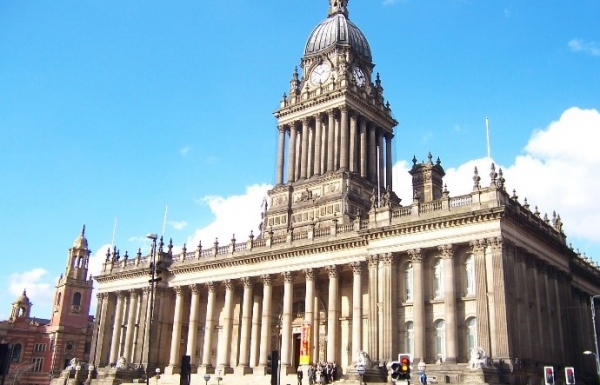 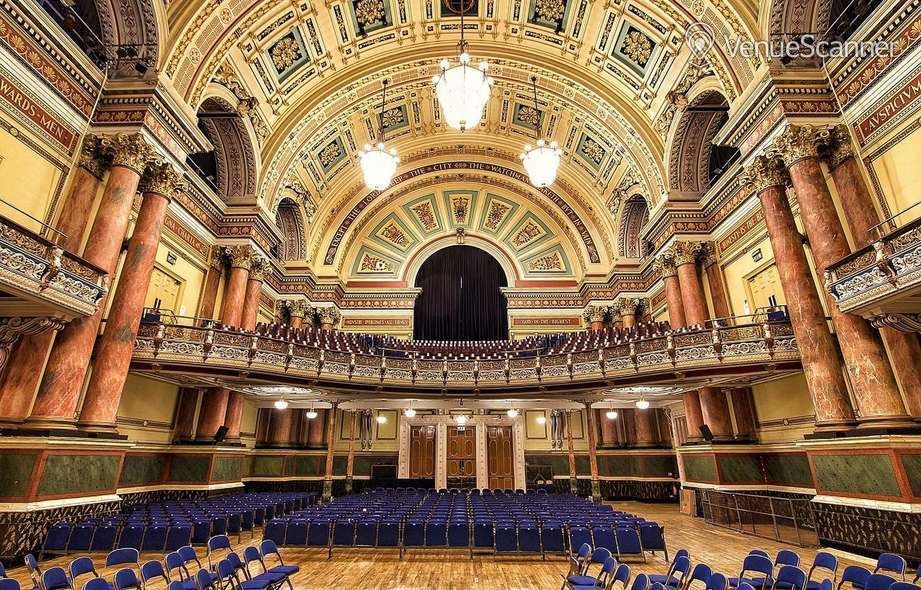